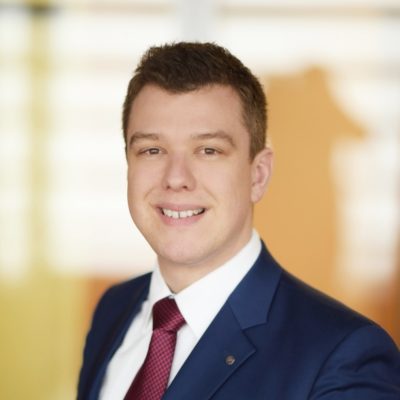 Michal Čáp is an attorney-at-law (2012) at ROWAN LEGAL. Michal specializes in dispute resolution, especially in international arbitration (commercial and investment) including various out-of-court solutions. Michal also represents clients before the Czech courts (both commercial and administrative) and before the relevant authorities (e.g. the Czech National Bank, environmental authorities etc.). Michal also focuses on sports law. He successfully completed his LLM (Arbitration & Dispute Resolution) at the University of Hong Kong (2014) and previously acquired his first master’s degree (Mgr.) at the Law Faculty of Charles University in Prague, Czech Republic (2009).

Michal is a member of the Chartered Institute of Arbitrators (MCIArb), and he served as the Vice-Chair of the CIArb European Branch (2018 – 2020). Michal is also a member of the Commission on International Arbitration of the ICC Czech Republic. Michal Čáp has been listed from 2017 to 2022 in the Arbitration Future Leaders ranking, jointly organized by Who’s Who Legal and GAR (Global Arbitration Review).

Michal is included in the list of arbitrators of the Czech Arbitration Court (he has already sat as a member of a tribunal and as a sole arbitrator), VIAC (Vienna) and the Shenzhen Court of International Arbitration (SCIA). He is a member of the Council of Arbitrators of the Football Association of the Czech Republic (he has already sat as a sole arbitrator and also as the chair of the tribunal; and as a member of the appellate body and is also a member of AFIA (Asia-Pacific Forum for International Arbitration). Michal previously gained experience in offshore jurisdictions. He was also a trainee in international arbitral institutions (HKIAC, ICC – both in Hong Kong, where he lived from 2011 to 2015, and now again from 2019 onwards). Last but not least, Michal publishes and lectures on the topic of international arbitration and dispute resolution. Previously, Michal worked as a junior associate in leading international law firms in Prague, Czech Republic, focusing mainly on the area of real estate law (transactions), business law and M&A. He continues to practice in these areas at ROWAN LEGAL, in addition to his main focus, international dispute resolution.

Represented several clients (mostly as plaintiffs) at the Czech Arbitration Court, in commercial disputes, arising especially from contracts for work and JV agreements.

Co-leader of a team providing a client with a second legal opinion on its investment (investor-state) arbitration proceedings against a state in the CEE Region.

Representing a client (a Czech bank) in proceedings where the claimant (unsuccessful defendant in the arbitration proceedings) was trying to set aside the arbitral award worth almost EUR 5 mil, including a submission to the Czech Supreme Court, which confirmed the validity of the previous arbitral award.

Leading a team handling the dispute resolution matters of a client, the biggest water infrastructure owner in the CEE Region, including out-of-court settlement negotiations.

Providing advice to international financial brokers – resolving disputes with competitors, customers and ex-employees (including dispute prevention). In addition, providing general labor law advice and representing the clients in proceedings at various stages with regulators (especially the Czech National Bank), and handling requests by the police.

Advising a client in a dispute arising out of the lease of office premises in Prague, including negotiating a successful settlement.

Providing advice to a bank and/or an insurance company regarding export financing: various analyses and opinions, often including foreign law (including co-ordination with collaborating law firms globally).

Advising an Asian bank regarding the validity of the Share Pledge Agreement, and possible options it has against the Czech target and an Asian borrower in this respect.

Core member of a team representing a client, a key player in waste disposal management in the Czech Republic, in hundreds of administrative proceedings, dozens of administrative legal actions, and also in various (pre) dispute negotiations with its contractors or its business partners.

Currently representing an athlete in a doping case before the respective sport federation, including submissions to the Arbitration Commission of the Czech Olympic Committee.

Represented several clients (plaintiffs as well as defendants) in civil courts in proceedings relating to various business claims, including the protection of competition (recently his team was successful in an extraordinary appeal before the Czech Supreme Court).

Participated in consulting for a Czech mobile operator in a dispute against an alleged provider of services.

Negotiated on behalf of a UK pharmaceutical company a settlement and agreement about instalments with the debtor, a Czech company.

Provided legal advice to a major Czech IT company in multiple jurisdictional disputes and participated in the modification of its model contractual documentation.

Michal has also been involved in the acquisitions and sales of various companies, whether in the Czech Republic or abroad (Hungary, USA, etc.).

Represented an Asian financial broker in a criminal law procedure for attaching their accounts in the Czech Republic.

Provided legal support in negotiations with suppliers and a property contractor, to a client – the investor. The disputed rights and obligations of the parties were resolved by a settlement agreement.

Beyond the scope of his dispute resolution work, Michal deals regularly with legal relationships in real estate, he represents both sellers and buyers, and drafts / revises (future) purchase contracts, and represents clients during negotiations (on both sides). Similarly, he provides advice on the rental of real estate, or the setting up of easements (focusing on water infrastructure, including related disputes).

Speaker at ICC YAF event: The psychology of decision-making in international arbitration, Warsaw (Poland), May 2019.

Speaker, chair of the panel (and co-organizer of the event): The Future of Investment Arbitration in Europe in the Wake of Achmea, for Better or for Worse…, annual conference of the Chartered Institute of Arbitrators (CIArb), European Branch, Prague (Czech Republic), April 2019.

Speaker, chair of the panel (and co-organizer of the event): The good, the bad, and the ugly. What has arbitration done for you? ICC Prague Arbitration Day 2019, Prague (Czech Republic), March 2019.