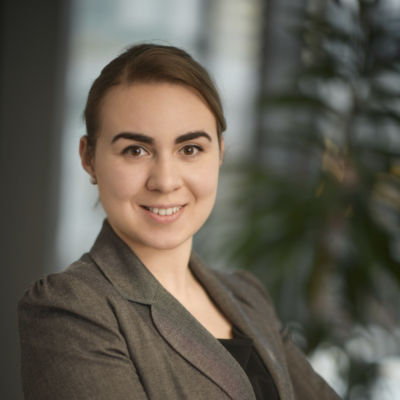 Margarita Karešová Kucharčuk works at ROWAN LEGAL as an associate and she is a specialist in international and domestic arbitration and focuses on dispute resolution.

She has in-depth experience in providing legal assistance to clients in arbitration and other proceedings, including international investment arbitration, proceedings with an international element in the area of power engineering and renewable energy, information technology, sports law and corporate law. Margarita also focuses on providing advice to experts in domain name disputes.

Before Margarita started at ROWAN LEGAL, she worked in a leading international law firm in Prague for more than seven years. She graduated from the Faculty of Law of Charles University in Prague and she is also a member of the editorial council of the Common Law Review.

She participated in co-leading the team in connection with representing the client, Invia.cz, a.s., in proceedings on a proposal for transfer of a domain to the client.

She is involved in advising a leading automotive manufacturer in connection with a dispute with a former supplier worth tens of millions of CZK.

Participates in advising an investor-client on its claims arising from a failed investment in Central and Eastern Europe under the international investment protection regime.

Participates in the legal representation of a multinational company, a leading provider of IT services in Central and Eastern Europe, in a dispute arising from a work contract.

Acted for a multinational telecommunications company in a dispute over the payment of the difference for the share price in a mandatory takeover bid;

Assisted in the legal representation of an international listed film distribution and cinema operations company in the acquisition of a multiplex cinema chain, including due diligence;

Assisted in the legal representation of a leading energy company in Central and Eastern Europe in the acquisition of stakes in other energy companies.

Title: Locus Standi during Enforcement of Rights Arising from Non-performance at Defects of Common Parts of the House
Publisher: epravo.cz
Publication date: 2017

Title: The Relationship between a Parent Company and its Subsidiary: Does the Family Stick Together?
Publisher: Common Law Review
Publication date: 2008